First Phase of Preparation for the Hero's Journey 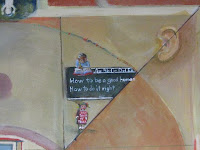 Dear Birth Peeps,
I am home from the ICAN Conference in St. Louis where over 250 passionate women (and a few men and lots of cute babies) gathered to learn about cesareans from many experts in the field. This was a well-organized, warm, gathering--and I learned a lot, met up with old friends, and made many new friends, too. Some are joining Birth Peeps. Welcome!

I'll say more about ICAN and cesarean prevention and healing soon, but let's continue with Change #23. Almost the first thing I did when I returned from St. Louis was change into my painting clothes and get out the brushes. My easel is broken, so I painted with the canvas on the floor. (Today my son, Lucien, came over and helped me glue the crack in the easel so tomorrow, I should be working in an "optimal painting position!"

When we are wee, innocent, magical-thinking, dreamy children.... we are rapidly, often passively, learning so many skills and lessons that will potentially serve and limit us during our adult life. These "lessons" are represented by the small notches along the rim of the mandala circle. There are millions of these moments!

We aren't learning these skills with any intention or foreknowledge that they will help us through an Ordeal twenty or thirty years or longer down the road...kids can't even think that far ahead! And yet, these social, mental, and physical skills will one day play a part.

We try to avoid unnecessary trauma for children, and yet sometimes a trauma in childhood plays a positive role in activating skills and personality characteristics that will later be helpful in an Ordeal. It's not that we "needed" the trauma, but being resourceful humans, we may source some strength from it.

When we were children, adults consciously and unconsciously taught us about being human, and how to fit in and function in our culture... in whatever way they understood it and learned it from the humans who taught them!

Pre-verbal children learn through verbal and non-verbal messages. And, because they don't censor what they see and hear, they see and hear EVERYTHING.... As soon as they have language, little humans begin naming everything, and they ask adults about the meaning of everything or they give their own meaning to the life around them and in them; that's why as soon as humans have learned enough language to tell stories, they become perpetual storytellers--ever narrating their life.

The task of seven year-old children (+/- a few years) is to learn Rules and to MAKE RULES. They want to know the Rules for games and for being human; they tend to follow rules, and they insist others to follow rules!

While everyday life is going on, e.g., ordinary conversations at mealtimes, facial expressions,special events, bedtime storytelling.... children ever-observing the world around them, listening, sitting in the car, playing at the feet of adults, watching tv, reading books....are making and reinforcing Rules that give their world order, keep them safe, tell them how to fit in or withdraw...

Some of these Rules they learned from the adults around them. If a Child is frequently given food when she says she is hungry, she makes an assumption about a number of things: food, asking and receiving, and security. This predictable relationship with food and her adult caretaker shapes many Rules and expectations around other relationships. Children generalize. If their primary caretakers are loving, that is their whole world and what they expect of others. And the inverse is equally true. If a Child is hungry and asks for food, and none is given, or the adult blames the Child... then the Child begins to tell herself a certain story and makes Rules to survive another way.

Rules and beliefs are tethered to emotion, memory, and longing. And some of the Rules the child makes up because they don't know the Rule, or the Rule they were given doesn't fit...

Every Rule serves a purpose: They tell us how to get love, be loveable, safe, and belong. And there are Don't Rules, Never do...Rules, and Always do...Rules. Rules often sound Absolute, but many Absolute Rules have a hidden Exception that only the Rule-Maker knows--(and this is what makes us so complicated and unpredictable at times).

In the painting, I depict the Child earnestly, eagerly, and attentively learning and writing down all the Rules he and she are learning. The little girl is proud that she has learned the Rules and knows what to do to be loved, to belong, and to get it right.

Later we will revisit how Rules play a crucial part in the Ordeal and Return. But this is enough for now.